Prince Harry and Princess Meghan have arrived in Australia and Invictus Games commences in Sydney this week. Temporary restricted areas have been established for the event limiting drone operations within the Sydney region for the duration of the event.

The Invictus Games is the brainchild of Prince Harry and sees wounded veterans compete in a variety of events. The Sydney games sees 500 competitors from 18 countries compete in 11 medal events. Like other large events, the Invictus games has seen the establishment of Temporary Restricted Areas to limit drone operations to only those approved by the controlling authority, New South Wales Police. 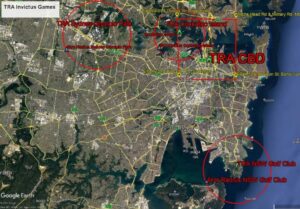 The Temporary Restricted Areas (TRAs) only apply to remote aircraft and do not affect piloted aircraft.  The TRAs apply between the 18th and 28th of October and details have been published through an Aeronautical Information Circular H33/18 . New South Wales police will allow those holding a Remote Operator Certificate and approval to operate in the airspace during the Invictus Games. Remote aircraft operated in the excluded category or recreationally are not able to gain approval to operate within the TRAs. Unlike other TRAs, the Civil Aviation Safety Authority has added the Invictus Games TRA’s to the “Can I fly their app” helping drone users identify the affected areas. Professional drone operators utilising an electronic flight bag such as Avplan EFB will also note the inclusion of the temporary restricted areas.

Piloted aircraft have not remained untouched, with a visit by the royals to the Royal Flying Doctor Service in Dubbo resulting in the airport being closed to all traffic except scheduled airline and emergency flights.