Extending the line of sight for commercial drones

Remotely Piloted Aircraft Systems must currently be operated within Visual Line of Sight (VLOS) of the pilot. This distance can-not be aided with binoculars or on-board cameras, which limits maximum distances the aircraft can be flown. The Civil Aviation Safety Authority is just about to release some new regulation resulting in the ability to extend the line of sight.

The human eye can see detail of 1/60th degree meaning an 1m object can be seen at approximately 3.3km. This varies with the conditions and the eye sight of the individual. Vision conditions such as myopia will result in this distance varying substantially. A small quadcopter has a visible area of approximately 0.2m and with perfect vision and conditions could possibly be seen at a distance of 660m. This is the distance limit of standard operations. In reality the safe operational distance may be considerably less if the aircraft is flying against a complex background with poor light and contrast.

Extending the line of sight

Much talk around the new regulations has been to do with opening up the <2kg weight category to uncertified flyers, but certified operators are also having their capabilities extended significantly. A new term called “extended line of sight” is to be introduced and is available off the back of a standard VLOS remote pilot licence. Extended line of sight is essentially the ability to set up a human radar network of observers in communication with the pilot to advise of air traffic or any other threats that may exist. This lets the aircraft be operated outside of the direct VLOS of the Pilot in Charge (PIC), but always within the VLOS of the communicating flight crew team.

Procedures need to be developed and approved by CASA as well as observers being trained to ensure the operation remains safe. Key to this will be the reliability of the communications links between the pilot, observers and aircraft, as well as the ability for them to work effectively as a team to maintain situational awareness.

No longer will long, narrow corridors be the pain of any aerial surveyor, or long beautiful shots be beyond the aerial photographer or cinematographer. Efficiency will increase and the role of the remote aircraft will continue to expand as the favoured tool in the box for high quality imagery and information gathering at a fraction of the cost of manned aviation. Extended line of sight means more instances which expensive to buy and maintain manned aircraft can be replaced with a drone and well trained ground based flight crews.

Many piloted aircraft fly low and can arrive at speed with little warning. This is common on beaches and coast lines especially where visitation by rescue helicopters, low flying sightseers and beach patrol aircraft are frequent and unannounced. Training your observers on the capabilities of your aircraft and what options available to you should the operation encounter these situations is important. 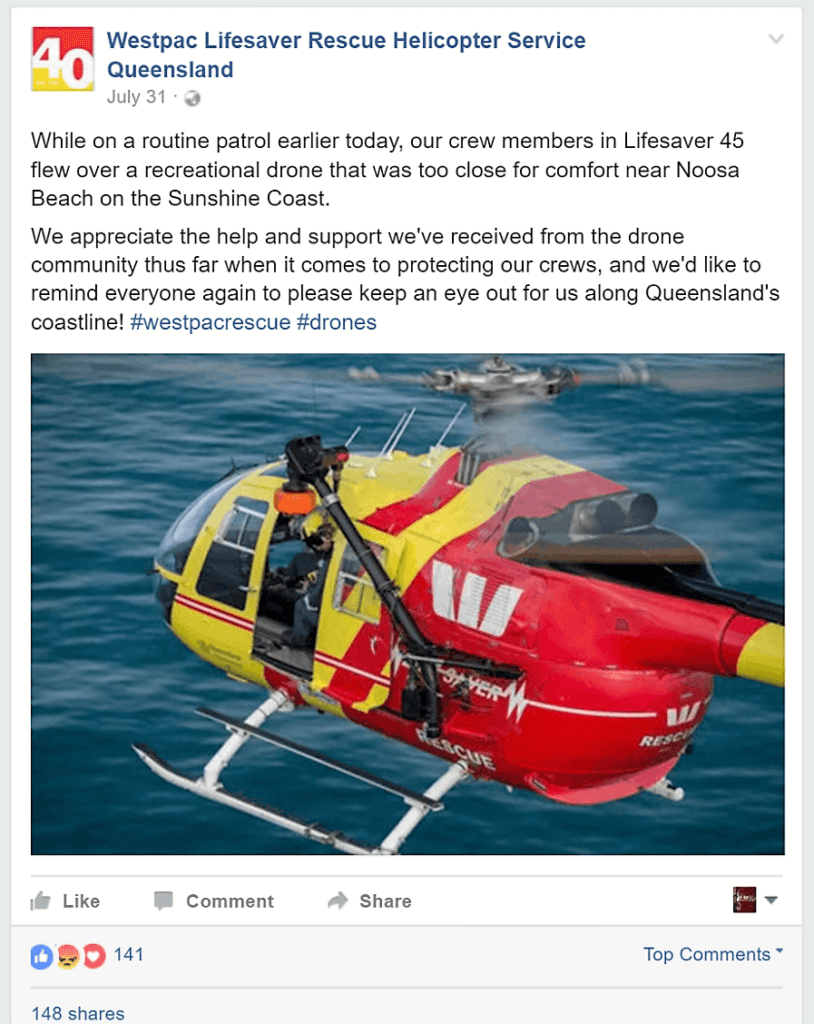 One of the most significant threats to small remote aircraft is birds, particularly large birds of prey. Just being able to see the airspace will not in itself keep your prized investment in the air. Observers should be able to see the aircraft at all times and standard responses for birds and traffic briefed prior to taking to the air.

Flying extended line of sight relies on observers in the team to identify a potential bird attack and advise the Pilot in Command (PIC) accordingly.

To work as a team, train as a team

For the Pilot in Command (PIC) the observer becomes your eyes and ears, a trusted partner in the team, keeping the PIC well informed of any activities within the air or ground space of operation. The pilot has the ultimate responsibility and as in any effective crew should be experienced enough to maintain situational awareness under stress and monitor all team member inputs.

Maintaining situational awareness during times of stress is challenging and is overcome by experience and training. These lessons have been learned over and over in piloted aviation such as Garuda flight 200 where the inexperience of the pilot and co-pilot led to a runway overshoot. In this case the inexperience created task fixation and a breakdown in communications that resulted in the plane landing at high speed without flaps down rather than aborting the landing for a second attempt. This is just one example of many where crew members did not effectively operate together. Those teams wanting to conduct extended line of sight operations are well advised to develop their observation, communication and coordination skills and during multiple sessions of within visual range training before moving to extended visual range operations.

The Civil Aviation Safety Authority is allowing certified operators to expand their abilities to extended line of sight, giving a trusted advantage over uncertified operators. The ultimate safety of the operation comes down to the organisation’s safety culture and procedures. This needs to be a priority on the way to extending the line of sight.