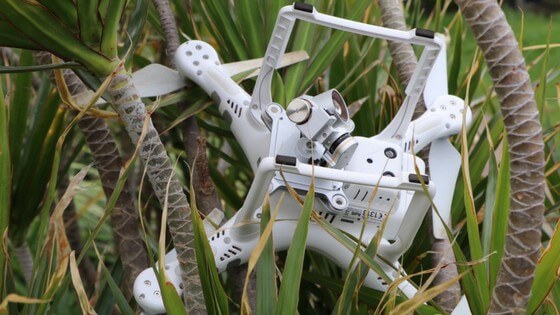 An RMIT study has found that aircraft equipment failure rather than pilot error is the most common cause of accidents and incidents in RPAS aviation… and it’s not because drone pilots are any better than their manned aviation counterparts.

The issue is that commercial and recreational drones are built and maintained to a much lower standard of safety and reliability than manned aircraft. This means that safe flying is knowing that your tech is potentially unsafe and limiting your operating envelope to avoid serious consequences when your system fails.

The paper in the journal Aerospace entitled ‘Exploring civil drone accidents and incidents to help prevent potential air disasters’ examined 154 drone incidents and accidents in USA, Canadian, UK, European and Australian air accident and incident data bases between 2006 and 2015. It compared the results to manned aviation incidents over the same period. Importantly the study showed a similar pattern of incidents to accidents which helps to support the idea that the data in the study are representative, even though it is clear that most drone issues go unreported.

The study is the first to comprehensively study drone incident statistics and is a valuable addition to efforts to improve the safety record of the drone aviation industry. The manned aviation sector is known for its robust reporting system for incidents which has long been the basis for improving air safety. This same reporting rigor has not been implemented in the commercial and recreational drone sectors and has made the collection of drone incident statistics a more hotch-potch affair. There are a number of reasons for the low level of incident reporting in the drone sector including low to absent levels of training for the majority of recreational pilots, drone operations typically occur away from aerodromes and areas of professional aviation expertise, and drones are not typically maintained or repaired by certified aeronautical industry professionals.

Paradoxically it is the lower risk profile of unmanned aviation (most aircraft failures are not life threatening) that may be the biggest barrier to the collection of good incident statistics and safer operation for the industry.

Tech rather than pilot error is responsible for most drone issues

The study showed that 64% of incidents were caused by a technical problem either on the aircraft or in the aircraft communication and control system. These issues predominantly occurred during the standard flight operations of take-off and cruising, with only a small proportion of incidents occurring during approach or landing and no incidents occurring while on the ground. Manned aircraft tend to have a larger proportion of on ground incidents because they operate in busy aerodrome environments that need complex coordination between aircraft and ground operations. Equipment problems (tech issues) accounted for 64% of drone problems while human factors (pilot error) came in a distant second at 22%. Organisational and environmental issues accounted for the remaining 14% of incident causes.

These results for drone tech problems differ starkly to manned aviation where equipment problems, environmental and operational issues accounted for only 24% of incidents combined and human factors (pilot error) accounted for 76%. The key difference here is the much higher level of reliability for aircraft involved in manned aviation, including both the reliability and redundancy of aircraft subsystems.

The study highlights that today’s drone pilots need to fly knowing the reliability limitations of their aircraft and aircraft control systems. While larger drones are seeing an increase in the implementation of redundancy for key aircraft subsystems such as redundant propellers, batteries and flight control systems; the bulk of drones flying today are still relatively light weight quadcopters with no redundancy at all.

For commercial drone operators looking to be exemplars of industry safety there are two clear messages:

An important component of high quality commercial drone training is understanding the failure modes and reliability of different aircraft systems so that you can plan your operations and equipment purchases accordingly. Having instructors with experience in the manned aviation sector ensures that their training and culture for safety is brought over into your RPAS operations so that you can can position your business as a leader in drone industry safety.