CASA has retired the “Can I Fly there app” which was plagued with problems and replaced it with a digital platform for aviation app developers to connect to. The first app approved by CASA is “Opensky” by Wing.

“Can I fly there app” in retirement

CASA has retired the “Can I Fly there app” which was plagued with problems and replaced it with a digital platform for aviation app developers to connect into. The previous model of an exclusive app resulted in inaccurate data causing mass confusion to recreational, excluded and professional drone operators alike. CASA should be highly commended for learning from this experience and offering an open digital platform enabling professional aviation application developers something to tap into.

The first app approved by CASA is “Opensky”. The offering is from Wing LLC a sibling of Alphabet Inc, Google’s parent company. Opensky is simple to use and available as a web, Android or iOS application. While Opensky sees an improvement on “Can I fly there” it does not have enough information for the professional user.

The key message from any application used to assess flight risk should be situational awareness, understanding the environment in which the drone is being operated.

There are the usual dynamic issues such as temporary restricted areas not appearing and lack of airspace information. A certified Electronic Flight bag such as Avplan alongside professional training remains key to understand the flight environment. The simple can I or can’t I fly there approach, while a requirement for the general populous, does not offer any increase in situational awareness.

While the first approved offering misses the mark for professional drone operators, CASA’s approach in creating a digital platform for app developers to tap into could lead to a competitive environment which should see vast improvements. CASA’s drive to incorporate extra administration features and ultimately a traffic management system is an exciting prospect. 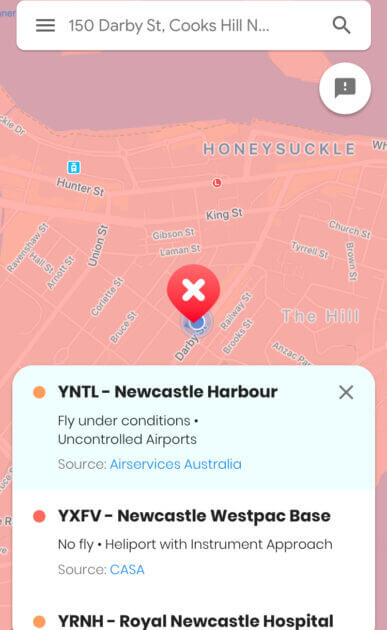 The challenge to incorporate all drone users

The sheer fact that the market for a safety app is so broad including recreational drone pilots, excluded category drone pilots and professional Remote Operator Certificate holders. Opensky does a reasonable job for the recreational and excluded user. At this stage, it is unlikely that one application will suit the needs of all drone users.

The challenge remains, how to encourage an improvement in safety to the uneducated. Observing current offerings, the app needs to be free and significantly dumbed down. To date, the old adage “you get what you pay for” rings true. The clause “not to be used for air navigation” should be enough to warn any user on the suitability of the product to professional aviators.

One thing is clear, a professional app needs to be developed with the workflow of the user in mind. This is unlikely to come from a broad-based awareness application.

What is the best option for professional users

Currently, there is no perfect solution incorporating the advantages of both types of platform. Currently, electronic flight bags like Avplan are the best option for overall situational awareness of the flight environment. The advent of CASA’s digital platform will hopefully see professional aviation app developers tap into the platform once the current trial is complete. The low subscription fees of such applications are a small price to pay for the wealth of information provided.